Those are just three of the accusations that federal prosecutors leveled against two Alabama physicians in April as part of a 22-count criminal indictment ― alleging that Drs. John Couch and Xiulu Ruan ran an opioid pill mill in exchange for hundreds of thousands of dollars in kickbacks from a pharmaceutical company.

Couch and Ruan were arrested in 2015 after prescribing Medicare patients a combined $4.9 million in Subsys ― a potent form of fentanyl, taken via mouth spray and designed to treat severe cancer pain ― between 2013 and 2014.

Some of those prescriptions were “diverted and/or abused by drug traffickers and addicts,” prosecutors say, and may have contributed to the opioid crisis currently gripping the nation.

Couch and Ruan deny the allegations.

A third doctor, Michigan neurologist Dr. Gavin Awerbuch, pleaded guilty in November to health care fraud and to prescribing Subsys without a legitimate medical purpose. Awerbuch prescribed more Subsys than any other dispenser in the country, according to the U.S. Attorney’s Office.

Couch, Ruan and Awerbuch’s alleged misdeeds signify more than a few rogue doctors attempting to turn a profit at the expense of patient health. The accusations against the physicians are part of a larger story about America’s insidious fentanyl problem and the doctors and pharmaceutical companies who’ve fueled it.

Many Americans first heard of fentanyl last year, when the singer Prince died after accidentally overdosing on the drug. Officials found pills in the pop icon’s home that were labeled as hydrocodone. Upon testing, it turned out these pills contained fentanyl. (It’s not clear whether the pills were mislabeled or illegally produced, or whether Prince even knew they contained fentanyl.)

But fentanyl has been a growing presence in the U.S. for some time now. According to the Centers for Disease Control and Prevention, the number of drug products seized by law enforcement that contained fentanyl increased by 426 percent between 2013 and 2014, and synthetic opioid overdose deaths rose by nearly 80 percent in that period.

Fentanyl is a synthetic opioid that doctors typically prescribe to chronic pain patients, like those with end-stage cancer, as an injection, a patch or a lollipop. It has a high potential for abuse and can be fatal even in small amounts.

Because it induces extreme relaxation and euphoria, fentanyl is also sold on the black market. And since fentanyl is cheap, it’s frequently mixed with more-expensive heroin or cocaine, something users aren’t always aware of when they buy it.

Now, a HuffPost analysis of available state-by-state data on synthetic opioid and fentanyl deaths and fentanyl seizures by law enforcement illustrates a troubling trend: Synthetic opioid overdose deaths driven by fentanyl, one of the strongest opioids on the market, are rising.

These data highlight pockets of the United States ― the Eastern Seaboard and Appalachia in particular ― where fentanyl seizures and overdose deaths indicate a rapidly evolving problem that law enforcement and science aren’t keeping up with.

“We have not peaked yet,” said Dr. Peter Friedmann, associate dean for research at the University of Massachusetts Medical School and chief research officer at the nonprofit Baystate Health.

“It’s going to be a big issue over the next couple of years,” said Friedmann, who has spent more than two decades studying substance abuse and addiction treatments. “I really think that the policy hasn’t caught up to the pharmacology.” 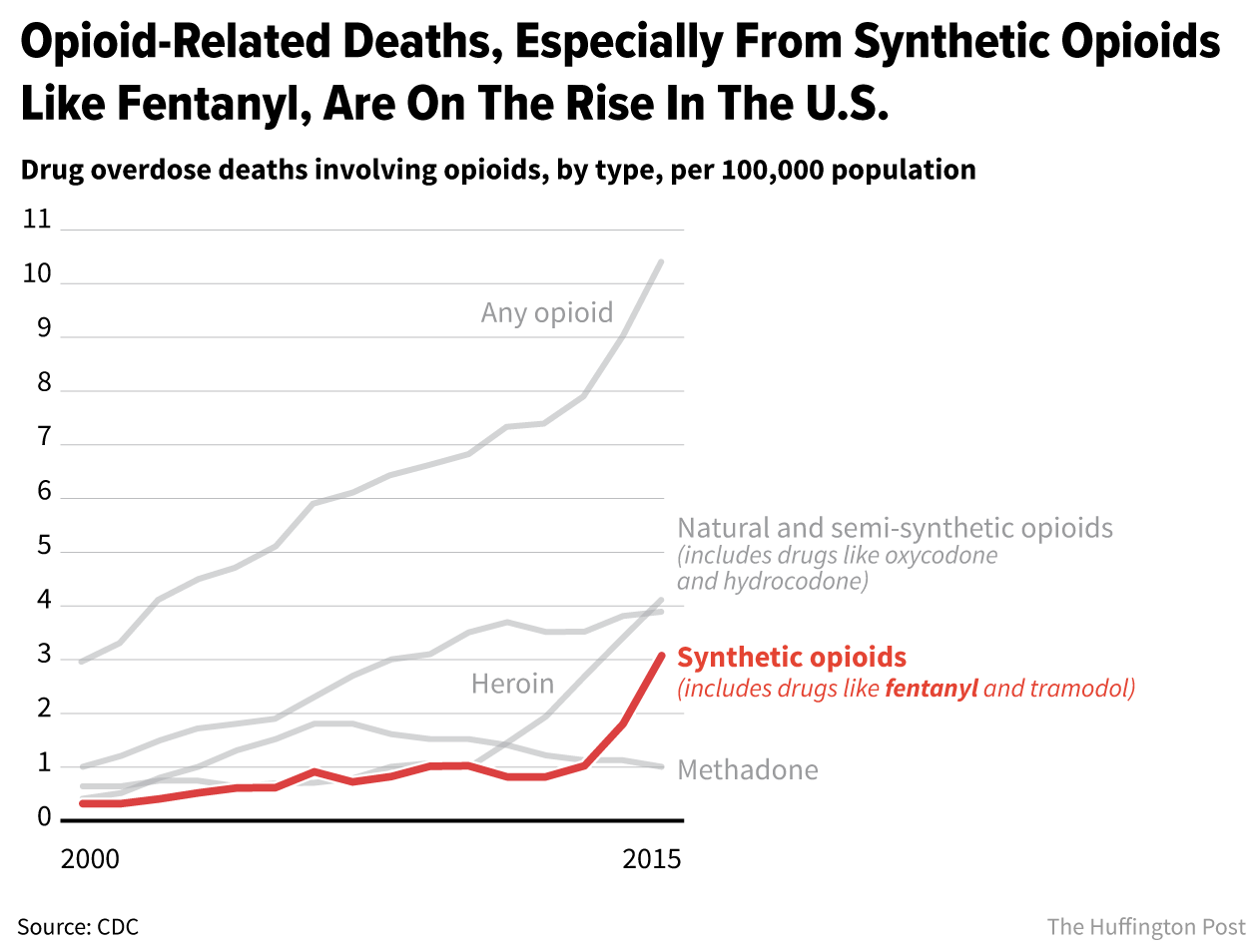 The rise of fentanyl

Although reports of fentanyl abuse date back to the 1970s, the current crisis has roots in the 1990s movement to end chronic pain.

It grew out of a series of compounding missteps. Pharmaceutical companies aggressively marketed opioids to doctors as safe and non-addictive during a period when those same doctors were under pressure to eliminate patient pain. The logical answer seemed to be to write more pain-pill prescriptions.

By 2003, 20 percent of 20- to 25-year-olds were abusing painkillers, compared to 7 percent of early-20-somethings a decade earlier, according to The New York Times. When the government restricted opioid prescriptions and cracked down on so-called “pill mills,” addicted patients turned to a cheaper and prescription-free alternative: heroin.

It’s a well-trod path. Forty percent of injection drug users abused prescription opioidsbefore they tried heroin, according to a small study published in the journal Substance Abuse and Rehabilitation in 2011.

Fentanyl is just the latest iteration of cheap and potent synthetic opioids. (In fact, authorities are battling an even newer synthetic drug, known as U-47700, in several states.)

Carfentanil is “used for tranquilizing elephants,” Friedmann said, noting that overdoses tend to happen when there’s a mismatch between a person’s tolerance level and the potency of the opiate they use.

When the government restricted opioid prescriptions and cracked down on so-called “pill mills,” addicted patients turned to a cheaper and prescription-free alternative: heroin.

In addition to prescription fentanyl, Mexican cartels smuggle black-market fentanyl across the border, and Chinese suppliers sell both the drug and the equipment to make it online.

“We have seen an influx of fentanyl directly from China,” Carole Rendon, now the U.S. attorney for the Northern District of Ohio, told the health news site Stat last year. “It’s being shipped by carrier. It’s hugely concerning.”

It used to be that shutting down a major production site would help curb fatal overdoses. When fentanyl-related deaths surged in 2007, for example, the Drug Enforcement Administration traced the outbreak to a single site in Mexico. They shuttered the lab and the deaths stopped. Today, with decentralized units popping up around the country, it’s harder for law enforcement agents to crack down.

The cheapest and deadliest of drugs

Part of what’s driving this public health crisis is that fentanyl is almost unthinkably potent. Patients with fentanyl prescriptions have overdosed even when they took the medication exactly as prescribed. DEA agents in St. Louis are learning to self-administer overdose reversal drugs in case they’re exposed in the line of duty. There’s a good reason officers are taking precautions: A speck of fentanyl the size of a few grains of salt can kill a 250-pound man, according to The Associated Press.

Fentanyl’s potency means that the overdose reversal drug naloxone, sold under the brand name Narcan, is less effective at reviving fentanyl overdose victims. A person overdosing on fentanyl could need twice as much naloxone to recover as a person overdosing on heroin ― and if the emergency responder doesn’t know which drug the person took, they might not administer enough medication to save them.

When Cathy Messina found her 21-year-old son David overdosing on her bathroom floor in 2014, she prayed her 911 call would bring first responders who could save her son. What she didn’t know at the time was that the batch of heroin her son overdosed on ― which came in a package stamped with the label “Bad News” ― was laced with fentanyl. David was pronounced dead at the hospital.

Messina isn’t sure whether David knew his heroin was cut. He may have wanted a better high than pure heroin could provide. Or he, like many drug users, simply may not have known that “Bad News” heroin contained fentanyl. Some dealers mix the cheap and powerful drug with heroin to improve their profit margins, and may or may not tell customers that their product is cut. Other dealers may be too far down the supply chain to know if the heroin they’re selling is tainted.

“Clandestine fentanyl is available throughout the United States, most commonly in the white-powder heroin market,” Melvin Patterson, an agent with the DEA, told U.S. News & World Report last year. “Fentanyl is added to heroin to increase its potency, or is mixed with and sold as fentanyl or disguised as highly potent heroin.”

“It’s all about money,” Friedmann said. “Back in the day, dealers didn’t want to kill their clients. You want them to be repeat customers. But now, there are just so many people that they just don’t care.”