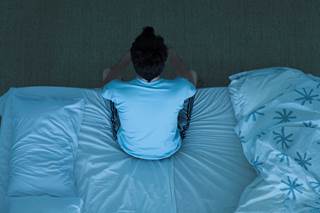 Sleep disturbances are core symptoms of major depressive disorder (MDD) and may be the first reason patients with MDD seek help.1

A growing body of evidence suggests that problems with sleep regulation precede depressive episodes and persist even during remission.3 A longitudinal study of 591 young adults found that insomnia lasting ≥2 weeks predicted MDD at subsequent interviews.4

Insomnia can increase the risk of several medical conditions, including heart disease, respiratory disorders, hypertension, chronic pain, and weight gain. 5 It can also increase the risk of inflammation, which recent research suggests may be connected with depression, as well.5

“There is a bidirectional relationship between sleep disturbances and depression,” observed Bei Bei, DPsych, PhD, lecturer at the Monash School of Psychological Sciences, in Clayton, Australia, in an email interview with Psychiatry Advisor.

“If a person does not currently have depression but goes through extended periods of time with sleep disturbances or insomnia, the sleep disturbance can potentially contribute to a mood disturbance or to even more severe depression,” she told Psychiatry Advisor. “The other way around is that people with depression and other mood disorders are more likely to report sleep disturbances,” said Dr Bei, who is also a clinical psychologist at the Monash University Healthy Sleep Clinic

Mechanisms of Sleep Disturbance in Depression

The circadian process regulates the daily rhythms of the body and brain, including the sleep-wake cycle.1 “Even though we do not see it, the circadian process is a biological rhythm that governs our alertness throughout the day and night,” Dr Bei explained.

The control of circadian rhythms and sleep is “complex and involves the fine orchestration of multiple molecular, biochemical, physiological, and behavioral mechanisms.”6 Circadian rhythms involve synchronization of numerous endogenous processes, with orchestration of the multiple oscillator systems in mammals being managed by a “central pacemaker.”6 The circadian pacemaker is located in the suprachiasmatic nucleus of the hypothalamus, which drives rhythms such as sleep-wake activity.1 Circadian dysfunction can have an impact on mood.6

Certain psychological mechanisms may connect sleep disturbances to depression, Dr Bei suggested. “For example, someone who is vulnerable to insomnia and depression might have overall psychological vulnerability, such as holding more black-and-white beliefs about the world and themselves.” The impact of this type of thinking is that they have more “extreme thoughts and beliefs” if they have difficulty sleeping and interpret their sleep problems in “a more alarming way, which can lead to a sense of hopelessness that can further increase the depression,” she said. Their agitation and sleep disturbance therefore create a vicious cycle.

“If you are not sleeping well, you often spend a lot of time in bed trying to get more sleep. Not only do you have less physical activity, but you may be agitated and restless, which contributes to further sleeplessness,” she explained.

“These days we think that both conditions should be treated in their own right, and typically, with either condition one treats, the other tends to improve,” Dr Bei commented.

Dr Bei noted that cognitive behavioral therapy (CBT) has been shown to be “an effective non-drug therapy for both conditions.” CBT for insomnia (CBT-I) has several components that improve sleep, including stimulus-control techniques, restrictions to spending too much time in bed, relaxation, and cognitive restructuring to address negative and counterproductive beliefs about sleep.

Other studies have found CBT-I to be superior to antidepressants for treating both insomnia and depression. A study comparing antidepressant therapy plus CBT-I, placebo plus CBT-I, and antidepressant plus education in sleep hygiene found that all groups reported improvements in both depressive symptoms and sleep. However, only the CBT-I groups improved in measures of objective sleep (assessed via polysomnography), and participants in the sleep hygiene group actually experienced poorer sleep quality.

Another study comparing CBT-I to antidepressant monotherapy found the combination to be superior to use of antidepressants alone in alleviating both depression and insomnia.9

Several pharmacologic agents and classes have been used in patients with insomnia. These include hypnotics, sedating agents, and antidepressants.

Melatonin, a hormone produced by the pineal gland, is involved with sleep regulation and improves insomnia caused by circadian schedules, such as shift work or jet lag.10 Melatonin may also have an independent effect in improving depression. A study of patients with breast cancer found that melatonin reduced depressive symptoms during the 3 months following surgery.11 A recent literature review suggested that, since chronobiological disturbances play a role in depression, a chronobiological approach that includes timely use of light and melatonin agonists could complement the treatment of MDD.

An increasing body of evidence supports light therapy for depression and circadian sleep disorders. A meta-analysis found that augmentation of antidepressant therapy with light therapy was superior to antidepressant monotherapy in alleviating symptoms of MDD and bipolar depression.13 A study of 122 patients found that bright light treatment, both as monotherapy and in combination with fluoxetine, was efficacious and well tolerated in the treatment of adults with nonseasonal MDD.

Clinicians routinely ask patients, “How is your sleep?” and sleep difficulties are commonly reported by patients, especially those seeking support for mood problems. Beyond asking a general question, it is important for clinicians to obtain more details about sleep disturbances experienced by their patients.

Dr Bei emphasized that for the treatment of insomnia, CBT-I as a nondrug approach should be tried first. CBT-I is an evidence-based approach that is comparable to sleep medication in the short-term and has more superior benefits in the longer-term.

The National Sleep Foundation and the Anxiety and Depression Association of America are useful resources to help patients find practitioners or reliable online CBT intervention.