Whether it’s a glass of wine with dinner, a beer watching the game or a cocktail while playing cards, Americans over 60 are drinking more than they were 20 years ago, a study says.
The study, published recently in the journal Alcoholism: Clinical and Experimental Research, found that regular consumption among older populations is on the rise.
“Given the larger number of Americans we are going to have (as the population ages), that’s going to increase the need for more public health programming,” said study author Rosalind Breslow, an epidemiologist at the US National Institute on Alcohol Abuse and Alcoholism.
Researchers analyzed over 145,000 responses to the National Health Interview Survey from 1997 to 2014. They observed a steady increase in the number of older adults who consumed alcohol. Men reported higher numbers of regular and binge-drinking tendencies than women, but the largest percentage increases were seen in the female population. 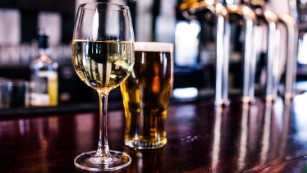 Women now drink nearly as much alcohol as men, study finds
“Historically, the prevalence of drinking has been higher in older men than in older women,” Breslow said. “It still is, but the gender gap has been narrowing over approximately the past two decades.”
That gap is the one between men and women who were “current drinkers,” consuming 12 or more drinks in any one year in their lifetime and one or more drinks in the past year. And although it may be narrowing, there is still a significant disparity by gender.
In the US 20 years ago, 54% of men 60 and older were reported to be “current drinkers,” and 37.8% of women fit the same description. In 2014, both groups saw increases: Men rose to 59.9% and women to 47.5%. The slightly larger uptick in women closed the margin to 12.4 percentage points.
Trends in the binge-drinking category — consuming five or more drinks in a single day in the past year — also increased among older people From 1997 to 2014, binge drinking in men rose from 19.9% to 22.5%. Instances were much less frequent in women but had a similar upward trend, with 4.9% of older women reportedly binge drinking in 1997 and 7.5% in 2013.
A drink a day linked to healthy aging
The numbers reveal that overall, older adults are drinking more, and the slight increase in female drinkers over 60 could be something to watch as the population ages.
“It was common practice to see more men than women, and now we see more equal numbers,” said Dr. Bhanuprakash Kolla, a psychiatrist at the Mayo Clinic, who was not involved in the study. “The equalizing is unfortunate because the use in women is going up, not that the use in men is going down.”

Although a bottle of wine may get better with age, our bodies, unfortunately, do not. Several factors combine to lessen the ability to consume and metabolize alcohol through the years. Around the age of 30 to 40 years old, our bodies begin to lose lean tissue and gain fat. The loss of tissue lowers the amount of water the body is able to hold, and water plays an important role in metabolizing alcohol. So as we age, there is less water in our bodies to dilute the adult beverages we consume.
This a large reason why two adults with a significant age difference can drink the same amount of wine or beer, but the older person will have a higher blood alcohol concentration than their younger counterpart.
Health effects of red wine: Where do we stand
“As part of normal aging, all of the organs in your body change, as well as your metabolism,” said Dr. Michael Perskin, assistant professor of geriatric medicine at NYU Langone Medical Center. “You just don’t metabolize alcohol as well. And the ability of the organs to respond to the alcohol, which is a toxin, goes down.”
Unlike vitamin-filled fruits and vegetables, Perskin said, alcohol has what’s sometimes called empty calories, those offering no nutritional value. Processing a beer or cocktail uses a lot of energy in the body, with no benefit and often more than a few problems.
The extra effort required to process alcohol weakens the body, Perskin said, leading to “poor control of diseases like hypertension and diabetes.” Sleep problems are also common complaints among his patients. “It’s hard to treat, and alcohol interferes with your sleep.”
Drinking can cause interactions with a slate of medications commonly taken by aging adults. Standard prescriptions and over-the-counter medications like antibiotics and Tylenol could have dangerous results if mixed with a cocktail.
“Medications could be less effective, or there could be side effects. And they’re less likely to metabolize it as quickly,” Kolla said.
When medications stop working, Perskin begins to ask more questions about his patient’s drinking habits. “Let’s say I’m treating someone with high blood pressure and they’re not having success with the medication. I should think they are drinking,” he said.
When combined, alcohol and pills can seriously impair adults, Breslow said. “Prescription medications can interact with alcohol, which increases the risk of harms, particularly the things like unintentional injuries.”
Due to these risks, experts recommend having a conversation with your health care provider about how alcohol should or should not be consumed.

The conversation about alcohol consumption can be challenging and awkward for someone caring for an older loved one.
“It’s always tricky,” Perskin said. “What I would suggest is that people are allowed to make poor choices when they’re adults. So assuming that the patient has the capacity to make decisions about this, they’re allowed to do as they please.”
Join the conversation

Kolla approaches the subject delicately with his patients. “It’s a process of education, both the patient and the family, about their safe limits of drinking.” Both Kolla and Perskin present patients and families with the potential side effects that come along with drinking.

If serious problems arise, such as binge drinking or harmful behavior, there are ways to get help.
“There’s a broad range of options that mostly fall into psychological treatments and medication options,” Kolla said. Several anti-craving medications cause the brain to inhibit gamma-aminobutyric acid (GABA) neurotransmitters, causing the brain to enter a relaxed state and reducing cravings for alcohol.
Groups such as Alcoholics Anonymous offer support for older drinkers.
“Overall, more older people are drinking,” Breslow said, “it’s kind of a burgeoning public health issue.”
Recent Posts
Recent Posts